The 30-year bonds issued by Bed Bath & Beyond (BBB) in 2014 have plunged to a low of almost 15 cents to the dollar recently, with some trades breaching the 15-cent mark as well. The $675 million issue, at a coupon rate of 5.165%, has been sliding steeply over the last few days, after a recent dead-cat bounce, possibly based on some inspirational activity in the meme-stock favorite.

At the present rate, the yield to maturity works out to an astronomical 33%, which is a clear indication given by the market that this is a risky investment, with the likelihood of default and bankruptcy for the issuer. Of course, the calculated return is based on the following main assumptions:

The unsecured bondholders are, thus, staring at the prospect of incurring significant losses in this investment. Haselkorn & Thibaut has investigated financial advisors and brokers recommending Bed Bath & Beyond bonds or stocks to clients. Please call us at 1-800-856-3352 for a free consultation. 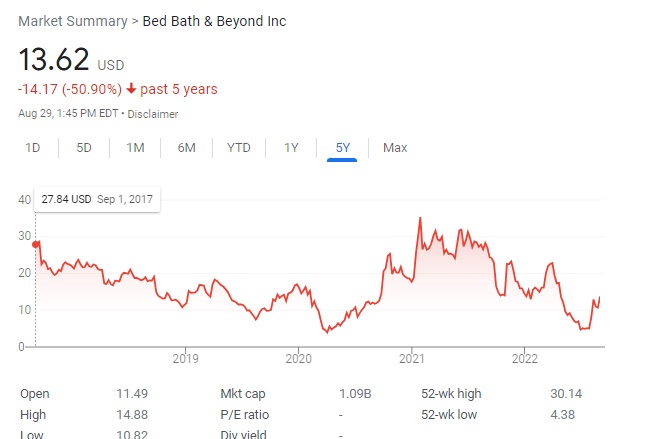 Information about the company’s troubles is emerging. A survey done by Pulse ratings, a consulting and credit-rating form, found that bills unpaid by BBB were accumulating and had crossed the 90-day threshold, as reported by Bloomberg.

While almost all respondents claimed that some of their bills were past due, some claimed that over half of their receivables were now is that status. The same survey also had suppliers complaining that “management is short on guidance about its plans to catch up with its past-due bills.” As reported by Bloomberg, BBB’s credit insurance cover has also been revoked by several firms.

The inability to settle supplier bills is often a clear indication of a company running out of options, and facing an unhappy outcome. While that is well known and understood by experienced traders as well as the market, the meme-stock communities, supposedly behind the earlier interest in the bonds, may not be as aware.

Other paper issued by BBB

This is not the only BBB-issued security in trouble. BBB had also issued senior unsecured 20-year notes aggregating to $225 million in2014 again, at a coupon rate of 4.915%. These have fallen to a low of 16 cents to the dollar, translating to a yield of 34%, with the same assumption that interest is paid consistently for the remaining period and that they are redeemed on maturity. The market has determined that to be an unlikely event.

10-year senior unsecured notes worth $300 million issued by the company in 2014, at a coupon rate of 3.749%, are down to 32.7 cents to the dollar, delivering a yield-to-maturity of 75%, the other assumptions remaining the same.

However, the marketplace seems convinced that the company’s unraveling will happen even before the maturity of these bonds in 2024 and that tight haircuts will be thrust upon holders by the bankruptcy courts.

Who would buy these bonds at this point?

PE firms and hedge funds could be the likely buyers. Their bulk holdings would give them a front-row seat during the bankruptcy proceedings to enable them to ensure their interest is protected, even as the small-holding bondholder is left clutching at straws and watching from the sidelines.

The case of activist investor Ryan Cohen bears this out.

His firm RC Ventures acquired a 9.8% stake in the company and began talking up the share, even bringing about some changes in the company. Five months later, he exited, sold his entire holding, once again triggering a price collapse. It is entirely possible that Cohen knew the status of unpaid bills of the company, even though the Bloomberg report was published a couple of days after RC Ventures sold out.

What happens to the meme-stock traders?

What about the meme-stock traders who already had holdings and stayed put or others who bought into the falling-knife stock?

They were, as usual, taken to the cleaners.

This appears to be the logical conclusion for a saga that was set in motion with the meme-stock communities boosting prices to the extent that the beleaguered company issuing fresh shares to raise money at inflated prices seemed like a distinct possibility.

But that was not to be. It is getting clearer by the day that people left holding these bonds will eventually be battling it out in bankruptcy courts to ensure reasonable protection of their interest.

Not that the initiation of bankruptcy proceedings deters the meme-stock crowd from taking a shot at bidding up prices even after that. What might be the motivation? That perhaps there are bigger meme-stock fools who will help them offload the holding at a good price.

However, one of the problems seems to be that the meme-stock crowd does not know to sell. Or, when to sell. Hence they eventually end up at the bankruptcy table and get cleaned out. The people who sell are the professionals, such as hedge fund managers. With the availability of falling-knife grabbers among the meme-stock crowd, they are able to sell out profitably.

They seem to be the only ones who did not know about the unpaid bills. Or, if they had an inkling, they did not know how to apply it.

The lesson for meme-stock traders clearly is that for any chance of a profit, it needs to be sold when it is high because without underlying fundamentals, at some point, it will move from the stratosphere down back towards earth.

Brick and mortar loses to eCommerce

Bed Bath & Beyond is the latest casualty in the battle between brick and mortar versus online and ecommerce. While yesteryear giant Sears was broken into small parcels in the bankruptcy court, Toys ‘R’ Us was liquidated. Brick-and-mortar stores that have high debts and are continuing to lose money have, historically, been difficult to restructure. Liquidation is usually how it ends for them.

Though Sears and Toys ‘R’ Us had e-commerce operations, they were probably subsidizing their stores which were consuming piles of cash to run. Eventually, it did not make sense.

Bed Bath & Beyond also has an eCommerce unit that is used by customers.

Usually, there is little joy for unsecured bondholders in bankruptcy proceedings. The only consolation for them, which might not translate into money, is that stockholders are even lower than them in the capital structure and often have to go away empty-handed from the table.

The brick-and-mortar meltdown has hedge funds as well as meme-stock traders interested. GameStop is a case in point. Shares are being talked up, shuffled, dumped by some while being bought by others.

Of course, each one seemingly is here to make money. Unfortunately, in this game, it seems possible to make money only at the cost of someone else losing it.

SEC (Securities and Exchange Commission) needs to wake up and take stock.

Haselkorn and Thibaut, InvestmentFraudLawyers.com, specialize in fighting for investors nationwide and have offices in Florida, New York, Arizona, and Texas. We have over 50 years of experience and a 95% success rate.   Call us now for a free consultation at 1-800-856-3352 or email us at [email protected] No Recovery, no fee.
Scroll to Top